Lesson 5 from: Learn to Draw: Landscape 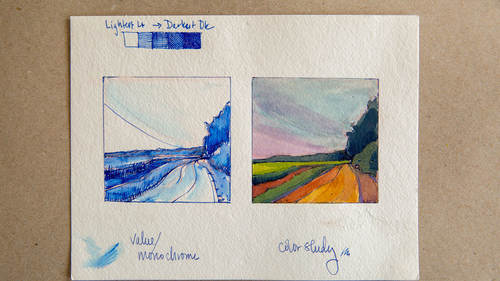 Lesson 5 from: Learn to Draw: Landscape

So, we were just at the park, where we were drawing landscape, and we were talking a lot about compositional dynamics and creating depth, and we experimented with some water-soluble media, and one of my favorite things is being outside, making small sketches. But then, when you come back into the studio, how do you use those sketches? How do you make them larger? So a lot of times, artists and people just trying to draw outside, they get back home or they get back to the studio, and they wanna make something larger out of their small sketch. People also take photographs on location, and I do that too. I take photographs, especially with things that are fleeting, like clouds, for instance. Clouds can be super frustrating to draw on location, because as the wind blows, obviously the clouds change so quickly. So, photo-documenting, collecting data through photography, and certain things like clouds, or waves, or natural elements that move in the landscape, is something that's really commo...

n, and something that is encouraged. Now, I also like to try to capture fleeting things on location, so these images here, a little while back, there were some incredible cloud formations here in Rhode Island, and I went out with my watercolors, and I did some really quick little watercolor studies on location, and I enjoyed how they turned out. I did several of them because I thought in doing multiples, maybe one will arise as my favorite, and one actually did, and it was this one on the upper right. So I said to myself, you know, I'd love to see this as a larger study, and so I could freehand draw it larger, but there are some things that could support you in enlarging things that I wanna show you, because sometimes it can be a little daunting to just expand from something this small to something this big. So the first thing I did, because I realized I wanted to use charcoal, to make a charcoal drawing from it, from the idea of that, but then also photo reference. So, the first thing I did, because these were in color, I just made a print of them in black and white, because this helps me compare if I go from this image in color to this image in black and white, I get to see really the darkness of those blues, and the lightness of the lights, and because I'm transitioning into a monochromatic drawing, a black and white drawing, that's a really useful reference for me. In addition, what I did with the photograph is I took the color version of the photograph, of that spot, and I also printed that out in black and white. So, actually, in this case, I can use sort of both of these to work from. But what I'm gonna encourage you to do, if you wanna enlarge something from a photograph, or even a drawing, is that you can use a grid, a grid system, so I wanna explain this and I wanna take you through it a little bit, step-by-step. As soon as you see what I'm doing, I think it'll become very clear this is a super useful technique for enlarging in the studio, or back at home, offsite. So, what I've done here basically, is I've taken the image, and I've put a piece of clear plastic over it, and that clear plastic is laid on top, and then I drew, I measured the height to width of this and I divided it up so that I could make a grid, and all of the rectangles in this grid are of equal size. So depending on the size of the image you're working with, that's gonna vary. I decided I wanted to have 16 sections. You could just divide it into four equal sections, you could divide it into as many sections as you want, that depends somewhat on the complexity of the image. Then, I took that grid, and I redrew it here, and when I redrew it, I enlarged the scale. So, let's say if this box right here was one-by-two inches, then this box here would be two-by-four inches, and so if you're gonna make it double the size, or triple the size, you're just enlarging the scale depending on how big you envision it. So, once we have this, it's actually a super easy step-by-step situation. You choose your drawing material, and in this case I actually chose vine charcoal, which is a very soft, very smudgeable charcoal, because I'm drawing clouds. I'm not drawing a building, I'm not drawing anything hard and industrial, I want this drawing to have a sense of softness and smudgeability. So then, the next step is, I basically ignore everything except for taking one rectangle at a time, so let's do that with a few of them. This rectangle here matches with this one here, and what I see here is that there's just a little nick of cloud coming out of the corner of the small rectangle here, so I take that, I bring it down to this grid, the larger grid, and then I just redraw this little shape, right in the corner of this one. So this is a larger version of this, and I'm using this charcoal to draw it. Let's come down to this one now. So, I'm shifting down one rectangle, I'll shift down one rectangle. Again, it's not overwhelming because you just take it one rectangle at a time, so you don't have to be looking at the whole situation, I'm only looking at this one. So I'm gonna come down, I know that this continues into this one, sort of a continuation, and then I'm just gonna continue to redraw what I see within that rectangle, I see it coming down to the corner, and I'm keeping a light hand, I'm sort of creating an organic mark because these are clouds, and there's some sort of puffy sections here, and there's a little bit here, and I'm noticing how close to the edge these are, and I'm noticing the negative spaces in between them, too. Sort of noticing how to situate them, but just within that rectangle. So I've already got two done, let's do one more here, arcing up. So this section here would be this section here, and you can see how easy it is to enlarge something. Sometimes I do this with really large things. So you can see how this technique is a really great way to enlarge things that you've found in nature, things that might've been drawn really small on location, possibly photographs, all of this you can use this grid system, and you can enlarge them as large as you want, so it's a super easy step-by-step way to make your drawings larger, and possibly be able to experiment with different kinds of media.

Amy is an excellent at teaching in a clear and concise way and getting exactly to the point. A good brief introduction to get you started in landscape drawing. I'm not sure it was exactly as I expected but the information presented is important for any beginner. Class was fairly brief but I still need to learn to put what I see down. My tree looks nothing like hers. This is where i need help next and was not really covered. I could easily take more of her classes if she had them.

I cannot understand the few people who were critical of this class. She gives dozens of excellent ideas for the beginning landscape artist. Especially helpful was the explanation and use of the viewfinder to focus your drawing. Five stars fom me to her. Thank you! Extremely helpful and inspirational.

Good tips on relaxing and enjoying the outdoors before you begin drawing. Great course.