Lesson 1 from: Baron Fig: The Story of a Startup 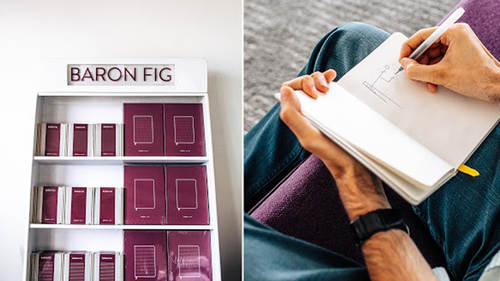 Lesson 1 from: Baron Fig: The Story of a Startup

1. Baron Fig: The Story of a Startup

I am joey phone I'm a designer, an entrepreneur in new york city and the co founder of barren thick so as a designer going through design school uh paid attention to all of my fellow designed classmates and the tools we're using we all had to of the same thing to primary tools which were the laptop and the notebook and the laptop was always the same to the mac books and the notebooks we're always so different different sizes, different paper types, different brands so ask myself, you know what what's the deal? Why can we get this ubiquity in the notebook area, then make a tool that everyone wants to use? And so we started there weii sat on this idea, me and my co founder adam cornfield we didn't do anything for like two years and finally adam was like, well, then let's, just do it let's just solve the problem let's give it a shot and it clicked that night I had an idea of what I wanted to make, which was a cloth bound book that was actually really nice and it opened flat, super simple ...

there's just two things s o I ran home and I took the notebook I had that I was using at the time and I wrapped it in painting campus because I used masking tape is discussing it's up on the shelf and it took the idea into reality. As bad as it was, it was like something I could show to adam the next week and be like, look at this, this is something this is the start and that helped us bring a final silly prototype that I made to a real prototype maker who then sat down with me and broke it down told me to come back in two weeks she was like, I got this, I'll see you later when I was a little nervous, but when I showed up she handed me a book. It was the most beautiful thing I've ever seen. I think when you you create something bigger or try toe do things that aren't your own skill set, you have to trust that other people can also pull it off. So we put it on kickstarter, we took photos, we created the story and we told people why we were doing it because creating things is important. It's not just about what's in your book but what's beyond the book, I think that's that's the big difference of what we do here on kickstarter we asked for fifteen thousand and, you know, raising one hundred sixty eight thousand dollars so that's eleven times well, that what we're asking for after kickstarter and did we sent all the books everywhere around the world and we got them out on time and we launched our site barren fig dot com er shortly thereafter, where we could sell now, finally to everybody in the world, not just through kickstarter, but through our own store. Uh, that was about a year ago. Now we've got two new products the apprentice pocket notebook and mosaic digital notebook on your phone. Barren fig the name came about is quite serendipitous. So I was sitting with, uh, adam and our friends and I was like, I was dating a girl at the time whose last name was barren. I know, I know. And I told him, I really like the word baron how, you know, can we work with this? And so our third friend immediately said, fig and, you know, we were like, a barren fig that sounds cool. What does it mean? So I looked up the entomology of baron and figure out where did these words come from? And it turns out barron is a symbol of apollo, which is the god of order and fig is a symbol of diane isis, the god of chaos and their brothers basically in yang's name, which means order and chaos we interpreted as discipline an impulse, right? So and I think it's really appropriate for our creativity because you do need the discipline to practice and practice your craft and get better at what you do but you need the impulse to play and have fun because I think that's the only way to come up with the really new things interesting things our brand is mostly purple with yellow accents and the purple iss wine colored for dine isis and the yellow is son colored for apollo they'll just fell in place our projects are a huge part of what we do the projects don't have the books in the most of them but if they do they're just not talked about they're just actually just being used right as a part of whatever the people are doing the projects are about creativity and what people can make in interacting with sometimes strangers sometimes artists to make something that has meaning to us which then translates having meaning tio our audience the poster project was the first barren fig project where we got twelve artists from around the world and we gave each of them and inspiring quote the other restriction that we gave them was the barren fig color power each of them went off and in their own style they interpreted the quote and made a poster out of it and we made fifty limited editions of each sold them and all the profits went to the makers who did it the book for project we collaborated with an artist on the west coast there was jeff joe via and we nailed a bunch of our confidence to aboard spreads open and at the top of the board and said, if I could not fail, I would dot dot dot. Then we carried around to different parks in the city, so people, strangers walked up to the board and we gave them markers, and they filled out all sorts of things funny, touching things that meant a lot to them. Building the barren fig brand has been super fun as a designer, right in getting tio curate what the brand says in the brand message and how it looks on keep it, I guess, really honest, but having made that brand it's like that is now my visual language all the time and that that can keep you stay off that khun khun make you suck so I make a iphone wallpaper every day that relates the day before and it's not the barren fig brandon it's, not the fonts, not the colors it's, not the style or the language, and that lets me keep that creative practice and that spark and then a carriage back to the business.

Joey Cofone is Co-Founder/CEO of Baron Fig and an award-winning graphic designer based in New York City. His work has been featured in Fast Company, Bloomberg, Quartz, Mashable, and PRINT, among others. Joey is the current 1st place winner of the American Institute of Graphic Arts (AIGA) biennial design competition, Command X; he was named a 2015 New Visual Artist by PRINT Magazine. He holds a BFA in Graphic Design from the School of Visual Arts in New York City; he also spent four years pursuing a BA in Literature and Philosophy at Seton Hall University. Before launching Baron Fig, he ran Joey Cofone Design, a small studio focused on creating brands for startups. Joey strives to make work that appeals to curious minds—work that’s beautiful, smart, and communicative. He believes that design is the least of a designer’s worries, that story is at the heart of all tasks, and jumping off cliffs is the only way to grow.
SEE INSTRUCTOR'S CLASSES

40 something looking for inspiration to do a startup. Thanks for some inspiration., Cool name and notebook

Such a lovely and inspiring story