Weirdness is the Key to Self Improvement 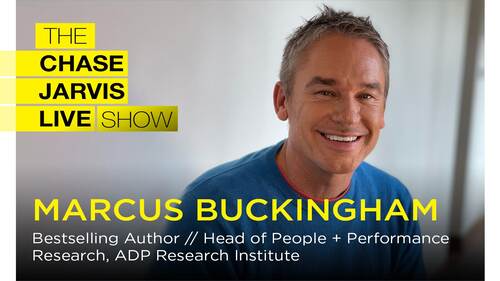 Creative Inspiration > Weirdness Is The Key To Self Improvement

Weirdness is the Key to Self Improvement

Weirdness is the Key to Self Improvement with Marcus Buckingham

For the past twenty-five years, Marcus Buckingham has been the world’s leading researcher into strengths, human performance and the future of how people work.

In his new book, Love + Work, Marcus helps us discover where we are at our best—both at work and in life. He is the author of two of the best-selling business books of all time, has two of Harvard Business Review’s most circulated, industry-changing cover articles, and has been the subject of in-depth profiles in The New York Times, Wall Street Journal, USA Today, Forbes, Fortune, Fast Company, The Today Show, and The Oprah Winfrey Show.

In addition to his research and author work, Buckingham is a sought-after speaker who has addressed audiences worldwide on using our strengths to achieve success. As someone who has dedicated his career to helping others reach their full potential, Marcus Buckingham is an inspiring figure whose work is sure to have a lasting impact on how we live and work.

Marcus kicks off this podcast, explaining how, at the age of sixteen, he met Don Clifton, the CEO of Gallup polling, and how it has led to a life of examining what is right with people rather than the traditional psychological approach of looking at what is wrong with people.

This curiosity subsequently led to Marcus building a company called “Strengthfinder,” which focused on exploring what makes people the best in their industry and how employees can develop their strengths in the workplace.

What do the best of the best have that others do not? Excellence is not the opposite of failure! If all you do is study your failures, you get an expert overview of what failure is.

Healthy and unhealthy marriages have the same amount of arguments.

One of the biggest misconceptions about marriage is that a healthy relationship should be free of conflict.

In reality, even the happiest couples argue from time to time. However, what sets a healthy marriage apart from an unhealthy one is not the absence of conflict but how we manage the conflict.

In a healthy marriage, couples can express their differences without resorting to name-calling or hurtful language. They can also resolve their disagreements in a way that leaves both partners feeling heard and respected. In a healthy relationship, arguments are a sign of intimacy and curiosity.

In contrast, unhealthy marriages have a persistent conflict that is never resolved, leading to resentment and bitterness and eventually causing the relationship to break down completely. People in this type of relationship need to step back from the conflict and protect themselves rather than examine the argument’s true nature.

While it’s normal for all marriages to have their share of arguments, how you handle those arguments makes the difference between a happy and an unhappy union.

What goes on in the space between the arguments is what defines the relationship, and studying bad marriages does not help you understand what makes the good ones stand the test of time.

In this section of the podcast, beginning at 13:30, Marcus explains how, at 23, his first job at Gallup was interviewing the best eight housekeepers at Disneyworld, handpicked out of around 4,000 housekeepers.

What makes these people so good at what they do? Why are they driven to excel at a position many people consider mundane?

The answer is that each individual found love in the work they did. But each person had a different reason for doing so.

For example, one employee said she loved to see the tight lines as she vacuumed her way out of the room. Another would lay on the bed and test the ceiling fans to ensure that the guest would not be disappointed with malfunctioning equipment when they flaked out on the bed at the end of a hard day at the theme park.

Another housekeeper would make a show of the fluffy toys by arranging them on the bed in cute poses with the TV controls and changing it up every day.

What makes these employees need to do the extra work over and beyond the job description?

The answer lies in what Marcus describes as “red threads.” The energy fields make people fall in love with the task. When you become immersed in a job and the time flies by, this is what Marcus refers to as a red energy thread.

Marcus says there is a ton of data detailing that the most successful people are involved in their red threads daily for around 20% of the time.

Successful people are involved in their daily activities rather than using them as a to-do list to get through the day.

Whether a housekeeper, a basketball star, or an entrepreneur, people who take their uniqueness seriously lead the most fulfilling lives.

Your Uniqueness Is Your Weirdness

Who else lies on a bed and turns on the ceiling fan to ensure it works? Your uniqueness is what makes us, as human beings, so unique.

The Norse have a term for your uniqueness called WYRD (a spirit or daemon), a noun intended to mean that each of us has a weirdness we were born with that we should celebrate. It is what marks us out as different from everyone else.

The people who thrive on life the most are those who pay attention to their own WYRD and develop and nurture it, which makes the individual unique.

How do we combat the fear of being seen as weird?

I asked Marcus how we reconcile our weirdness with people we imagine are more intelligent or rounded than we perceive ourselves. How do people, particularly teenagers, who are just starting on life’s journey listen to their weirdness and pursue red threads rather than being told they could become doctors, dentists, or astronauts?

You can be anything you want, telling you that you are an empty vessel waiting to fill up with ideas.

Your brain contains trillions of cells called neurons. These interconnected neurons have electrical signals that allow them to communicate with each other.

The junctions where these signals pass from one neuron to another are called synapses. By the time you’re 19, you’ll have a unique 100 trillion synapses in your brain. The connections between neurons lead you to like some things and loathe others, leading to your uniqueness.

The process of synaptic pruning begins in adolescence and continues into adulthood, one of the reasons why teenagers are often more impulsive than their adult counterparts. As the synaptic pruning process occurs, the brain becomes increasingly efficient in its function, developing better connections and becoming more adept at solving problems.

Your growth and development are, therefore, a result of your uniqueness. This concept is also explored in “The Talent Code” by Daniel Coyle if you would like to explore the subject further.

Marcus says that to stand out in your field of work, you must take your WYRD seriously. Your WYRD is your unique combination of talents, strengths, and passions that make you who you are.

When you know your WYRD, you can use it to your advantage in everything you do. You will be more productive, creative, and successful when working in line with your WYRD.

If you want to build a business, then you need to instinctively get good at building teams by recognizing people’s red threads, strengths, and weaknesses.

Bringing the individual strengths of each employee together as a team makes rapid development and growth possible.

I asked Marcus if a community is a good word substitute for building teams.

He replied that putting aside race, religion and other preconceived notions was essential to building a community.

Ask the question and then shut up and listen to the answer!

Life is so short. We only have a limited time on this earth and must make the most of it. Too often, we put off doing what we want because we’re afraid of what other people will think. We’re so scared of failure.