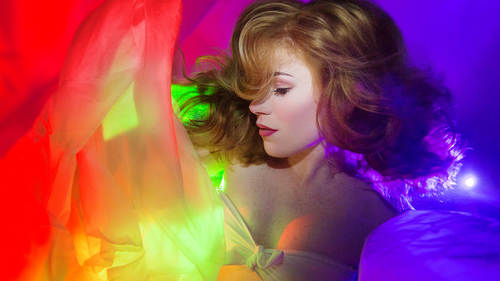 Let's talk about the concept of dodge and burn. When I was first starting out and I was like, Okay, I'm going to learn how to retouch skin and it's going to be great and this is going to be wonderful. I followed all the directions that I saw online. And then basically saw no difference. And I was like, What am I doing? Why am I spending all this time doing this? This is crazy. And so, I wanted to talk a little bit about why we dodge and burn first. Because I think the concept of dodge and burn is important to grasp before you start dodging and burning on your actual images. So, remember when I said we are lucky enough that we, that our art form is 2 dimensional. It's not 3 dimensional. We work with photographs. We have an x-axis and a y-axis and that's great. Because we don't have to deal with depth. But that doesn't mean we can't forget about depth. Because we need to create the illusion of depth in our images. So if you are really a glutton for punishment and you really want to under...

stand dodge and burn to its entirety, down to the pixel level, take an image like this and dodge and burn it. Oops, I don't know where that little guy came from. You can dodge and burn it in two ways. You can dodge and burn it to accentuate the ripples in the fabric. And you can dodge and burn it to to get rid of the ripples in the fabric. Okay. And after you do that, you will be like, I am a dodge and burn master. I am a Jedi of dodge and burn. So, let's talk about how make up artists use dodge and burn. They don't use the same thing, basically what dodge and burn is, is it's brightening areas that you want to appear closer to camera. And darkening areas that you want to appear further away from camera. So, even as far back as photography, people were basically using this in camera. So they would take a reflector on black and they would put it underneath here. And what that's going to do is it's going to darken the area underneath the chin making the illusion that the under area of the chin is further away. Those are some of the OG tricks of photography. So we're doing the exact same thing. We're just using Photoshop to do it. So as you can see here, we have make up that's been put on the skin and before it's blended this is what the make up artist has done. Thank you Michael Corsentino for the image. And let's look at once it's blended. Where is this shot? Dodge and burn make up. So once it's blended this is what the image looked like. This is also Michael Corsentino's image. And then after I dodged and burned, that's what it looked like. So I did the retouching on this as well. So the same concept just using different methods of doing it. Let's see, where is my pipe? So again, dodge and burn. We've got 2 dimensional, we've got a 2 dimensional plane but we want to make something give the illusion of three dimension. What do we do? We add a highlight and a shadow. So you have to think back to your figure drawing classes. And you have to think about how you create the illusion of 3D on a 2 dimensional scale, on a 2 dimensional, yeah, you guys get it. (chuckles) Okay, so don't save that. So I'm just going to show you two more examples. We've got an egg here, before and after. You can see how I'm adding the three dimension just with adding brightness and darkness in specific areas. And then I think this last one is really important. It's a beach ball. But it could also be an eyeball. So if I have time today, I'm going to talk a little bit about dodging and burning features. Lips, nose, eyes as well. So what I think is one of the tell tale signs of over retouching is when somebody takes the corners of the eyes and brightens them up extremely. So what you're basically doing is you're taking a 3 dimensional object that has natural shadow and fall off around the sides it, like our 3D ball, right, cause that's an eyeball and by brightening the sides and the corners of the eyeball, you're bringing them forward. So you're flattening that 3 dimensional object, giving the illusion that it looks kind of fake. Right? All right, so that is a little bit of the concept of dodge and burn. Are we all on the same page with conceptually what we're trying to do with dodging and burning? My last thing before we move forward is I'm going to talk a little bit about picking the right dodge and burn colors. So, for a while, the way that I learned how to dodge and burn is using the a highlight color from the image and a shadow color from the image. To use as my two colors to brighten and darken. Well, there are some problems with that. Because if you look at the shadow color here, you can see how red it turns the underlying image. And this one with the highlight color, you can see that it actually changes the color to yellow. Okay? So what I've done is I've created two ways of modifying those colors, keeping in mind that this is a problem when you use those shadow and highlight color. The native shadow and highlight color. I know that the highlights are gonna go a little yellow so I'm going to make the color that I use and that I sample, I'm going to make that color a little bit more red. So that it neutralizes that yellow color. The same with the shadow color that I pick. I know that the shadows are gonna go a little bit red, so what can I do? I can add a little bit of yellow to this shadow color. So that it allows me to not have that color shift. Not have such an extreme color shift. Can you guys see the color shift here on this monitor? Can you see how these two match a lot better with the skin then these two up here? And then white and black are just way too extreme for me personally. So that's why I do my own.

For the past 10 years, Kristina Sherk has been a high-end photo retoucher based out of Washington, D.C. She specializes in beauty retouching and has done work for many clients such as...
SEE INSTRUCTOR'S CLASSES

Quick and to the point! I did learn a few things from the course. Thank you. My only issue is that the model's face was already for the most part blemish free and nearly perfect. It would be good to see these techniques done on " not so perfect" skin. Kristina even said that the model's skin was nearly perfect. So why not use an image where we can truly see the skin retouching process at work?

A good class and information is easy to understand. But in the general world, some us do not have models & clients with perfect skin. Wish this was demonstrated on a person with a few more problem areas, so we can really see the improvement on the person.

Amazing class. It would make my work so much easier. Kristina is a great teacher.