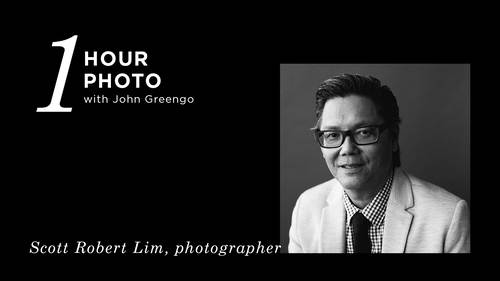 Hello. Welcome. Everybody to one hour photo. My name is John Gringo, and on this episode I'm gonna be interviewing Scot Robert Lim. He's a great portrait and wedding photographer who specializes in on location portrait's. He's brought in a collection of some great work. We're going to sit down, talk together, talk about his work and his career, and it's teaching and everything else that he does. And after that, well, we're gonna do is both of us are going to sit down and look at some of your photos that you've submitted to our classes. And I'll be honest with you. What I've done is I've Connick onto his classes where he has a lot of people doing portrait work, and we're gonna be taking a look at those images and reviewing them. We're gonna be doing this in light room and see if we like him. We don't like him and what sort of improvements and suggestions we have for all of you. But before we do any of that, I always like to answer some questions from all of you. So let's go ahead and ge...