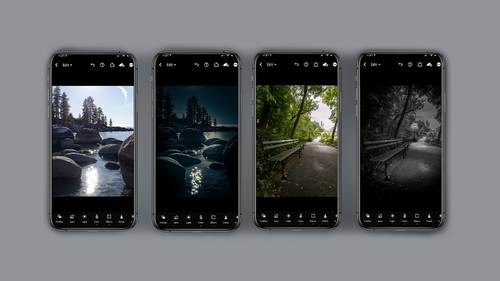 9. Looking at the Lightroom Desktop Interface

Capturing for Day for Night

Day for Night on Water Scene

since we're going to be talking about working over the light room ecosystem, let's talk about the interface of the desktop version. The images don't show up quite the same way in the library panel. So I'm going to suggest if you think you're going to work on your desktop, I'd put your images in an album how you do that is real simple under albums in your library panel. You click the plus sign, you click album. I'm just going to call this new album a type So slow hit. Okay now I have a new album. You say there's nothing in there right now. Then I can simply go to my photos. So let's say I scroll all the way up to my recently added photos and I have a family get together. Here is a track race. I'm going to click and hold on the image. I can also click multiple images, click and hold. And then do you see him? Excuse me click you see on the bottom it says add to right here. Just click and then you can scroll to your where your new album is. I should put an A. So would be at the top aren't ...

I dark? Here's my new album hit add now. Those images will still show up in my recently added but now they will also show up in my new album. You can tell them kind of crazy for albums because I use them all the time. Anyway. Really simple. And then that will translate to your desktop version. Let's take a look at the menu bar on the light room desktop version. Something to pay particularly close attention to is you can edit directly to Photoshop from here. It will open up Photoshop for you. You can also import profiles and presets and migrating from Light Room Classic catalog in addition. So those are the important wants to pay attention to in this menu. The edit menu is pretty basic, but at least, you know it's there, you have access to albums. I have to tell you I don't generally use this, but again, you should know it's there. The photo menu has ratings, which is really handy and you can also flag or star, that kind of thing. You can add to album just like we did on the phone here if you like. But you can also do a quickie and something I'd like you to pay really close attention to is the enhance adobe has some amazing enhancing image capability coming up in the future. It's already available in a cr it's coming to light room soon. So take a look. It's gonna be pretty amazing. View is pretty standard. Um I do want to call attention to the editing tools, however, because you can access them here or on the tool bar to the right, and it just looks very different than the phone. So I don't want you to be thrown off the next. You'll find the window, which is pretty standard. And I think overall the across the adobe ecosystem, the menus work pretty similar, so I don't think you'll get lost. The only thing you need to remember when you're on the desktop is actually go to the menu bar every now and again.

I was so excited to be able to take this last course in the Mobile Photography series and as usual Lisa Carney did not disappoint! I just love her teaching style. She is relaxed, friendly and down to earth. She relates her techniques and processes in plain non techy talk and demonstrates it so you can follow along and learn. I have been a user of Photoshop and Lightroom Classic and now LR Mobile is my go to for most of my post processing work. I also learned about some great new apps for my iPhone and who knew you can take pictures through LR Mobile! Thank you Lisa for putting together this mobile series!

Solid start to my Wednesday, Thank you for great job hosting Kate Dessa. Lisa Carney always gives everything she has in all her tutorials/webinars I have experienced. She continues to "give" and "share" her knowledge and true passion for her craft with everyone, thank you both for this mornings kickoff!

Love Lisa's energy and excitement. The course is well laid out and easy to follow. I recommend this course.