Lesson 3 from: Learn to Draw: Interiors 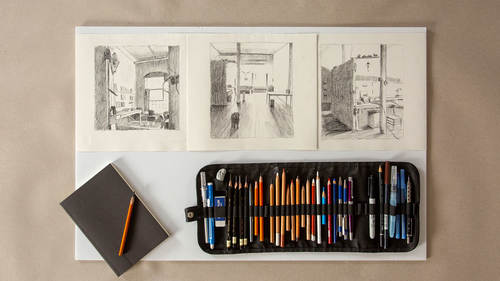 Lesson 3 from: Learn to Draw: Interiors

So, we've come down to another area of my mill building and this is an area where it's sort of a walk through, people coming in and out. And this is something when you decide that you are ready to draw outside of your home or outside of your studio, and get out into public spaces, you'll have to deal with those variables. And, at first, it can be a little bit daunting, but overtime, you'll build your bravery to just get outside and draw no matter who's watching. So, I love this space It's really different than a one point perspective hallway, where all the lines are converging to one vanishing point. In this situation, there's a corner. We're looking at a corner and there's, in that case, two vanishing points, Two point perspective. And I'm going show you some really simple ways to draw two point perspective with ease and also make it a little bit less daunting. So, right here I basically have, like, a diagram of this corner. And, the diagram shows, pretty much, the corner, the basic l...

ines, and I'm actually going to use this in a little bit to show you a short cut. But, it's done on plastic, it's done with a sharpie. But, before we go there, I wanna talk a little bit about the principles of two point perspective. So, if I take this overlay and bring it down, at first it might seem a little dizzying like, oh my gosh, there's red lines and blue lines and what's happening? But, let's just take it bit by bit. So, the first thing I do when I come into a situation like this, is I ask myself what is my eye level? So, I'm taking my eye level, I'm looking out and I'm just sort of noticing where my eye would hit the wall. And, if you look at this red line here, that's my eye level. However, in this situation, rather than having a single vanishing point where all the lined converge to it lines are actually converging out to the sides, out to two vanishing points, that are actually in this case, off my picture. And, that's something that we can start to site if we work with siding angles. And, also notice that these vanishing points are on my eye level, which makes it easier. They're not just anywhere, they're on the eye level. So, I can start to place those by, initially, siting an angle, which we did before. To help start working with that. Now, the lines that are going along my eye level are all horizontal, okay? But the lines that are above my eye level like the bottoms of these stairs, here and here, they're angling down, down, down , down , down to the right. The things below my eye level, like the window sill, are angling up to the right. And the inverse happens when we're coming in this direction. So, there's sort of a mirroring happening and that helps really create the dimension in space once you just notice where the lines are going. It's sort of magic, when you actually see it happening. So, I'm gonna take this diagram off the top of our picture. And then, I'm going to actually show you what this is, which is, it's just a piece of plexiglass, and on that plexiglass, I actually, traced my scene with a sharpie, which is permanent marker. And, in doing that, it reveled exactly what was going on. And I do this a lot with my students. We go around a trace things, and then we would take them back to the studio and we analyze what's going on with perspective and then we can transition to making our drawings. So, it's a really direct tenchnique and it's really useful in terms of proving that these almost tricks of the eye are going on. So, this overlay is something that I, it really helped me start this line drawing. And, this is really the next step after you suss out what's happening with the angles with two point perspective. So, let's take a look at the next step with the line drawing. So, I love this scene. I love, sort of, the simplicity of it. And, basically, I set up my points with my diagram, and made sure that things like the line of the floor so, I'm gonna just sort of darken up some of these lines, to reiterate our ideas, with a charcoal pencil. I did this preliminary drawing with a graphite pencil, cause it's nice and light. But, from there, I'm gonna transition to working with charcoal, which is darker and kinda smudgy and velvety looking. So you can see how much darker this pigment is as I come down, and I'm noticing this corner is really a crucial element of this perspective. And when we're looking into a corner, remember that's when we start to think about two point perspective. So, we have this corner, that really one of, it's, like, my furthest point away from me. And then, from that corner, all lines come through, and this line coming through, would end up hitting my vanishing point there. This line coming through, would end up hitting my vanishing point out there, just like we saw in our diagram earlier. So, doing a diagram like this, and keeping it on the side can also really help us, sort of place things in space and remind us of what's happening. So, I'm gonna just make a few more comments about creating this kind of space. Look at this line here, of the window, of these great glass block windows. This line is, pretty much, at my eye level So, it's pretty horizontal. But, this is a really nice illustration of how this line is horizontal at my eye level but the lines about it angle downwards and I just wanna kind of darken that. And the lines below my eye level angel upwards. And then these all would fan out, but also converge at a vanishing point on this side. So, two point perspective, practicing two point perspective, is really gonna allow you to create beautiful interior spaces. Not looking down a long hallway, but rather, corners. Like, if you wanna draw the corner of your bedroom, or the corner of your kitchen. Also, fun to kind of, draw your closet, right? Like, just kind of getting into little spaces and seeing how we can create these, sort of, converging lines, these corners, that relate to two vanishing points instead of one.

Inspiring and fresh. Amy does a wonderful job of teaching me information efficiently, showing the beginning of processes and the more finished process, as well as lots of alternative ways of approaching the practice. i love the student work shown as well to reinforce the lessons.

A miraculous teacher, with very refreshing talk. But to me has not become clear completely as with the Perspex disc functions practically without achieving absolutely shaky results. Could one not have shown this still briefly?