Lesson 4 from: Learn to Draw: An Introduction 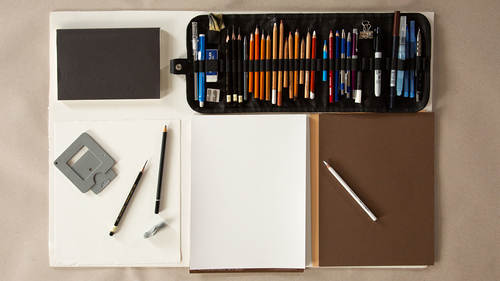 Lesson 4 from: Learn to Draw: An Introduction

A big part of drawing is making flat things become three dimensional, and there's some strategies for this, some simple strategies, that I'm gonna show you with everyday objects. So we're gonna be using a regular old coffee mug. We're gonna be using a block, which from the front, or from the top directly, might feel more like a square, or just a flat rectangle. Gonna talk a little bit about how you can pop that out, and make it look more 3D. And then we're also gonna use an egg, which is a classic drawing motif, and talk about how we could wrap lines around that, to create more of a three dimensional quality. So, I'm gonna start talking about the coffee cup, and I'm gonna take you through a series of diagrams highlighting some really key concepts that have to do with three dimensionality, and then later on, if you wanna learn more about it, you can check out my Drawing Basics course, where this is really elaborated and full. So this is sort of a primer, and then from there, you can tak...

Amy is a talented artist and a very effective teacher. I have the pleasure of having her as a professor, however these online classes show her passion and expertise just as much as in our in-person classes. If you are intimidated by drawing, like I was, her teaching helps to simplify the process of learning how to draw while also inspiring her students to take more risks with their artwork. She will help you realize that studio art really can be for anyone, and that drawing can be a meaningful tool for expression, relaxation, and growth. I highly recommend any course that she teaches, online or in-person!

Great introduction to drawing and sort of the key skills to develop if looking to improve or starting. Not a lot of hard and fast skills but definitely a great first building block to what someone can expect. Great job Amy!

This was an excellent class. As a beginner I learned a lot of great techniques that I hadn't even considered. It really changed the way I view drawing! She's great, I'll definitely watch more of her classes!