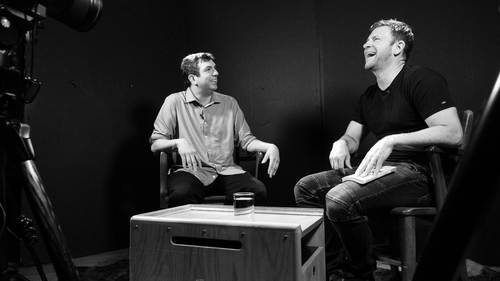 Happiness Through Gratitude with AJ Jacobs

AJ Jacobs is a multiple NYT bestselling author, a journalist, a lecturer as well as a warm and hilarious human soul. He’s on this week's podcast and is…SO GOOD. In this show, we learn why AJ intentionally puts himself in the most extraordinary circumstances … like when he strove to be “the world’s healthiest man” going from Dad bod to ultimate health (Book = Drop Dead Healthy). Or when he lived according to the bible for a year, beard, goats and all… (Book = The Year of Living Biblically). In this episode we have a blast, learn and laugh a lot, and discuss AJ’s new book Thanks a Thousand, which chronicles his journey of gratitude in the same lovable – but brilliantly insightful – way. AJ has more tools in his toolbelt for being happy, healthy and productive than nearly anyone I’ve met.

A.J. Jacobs is an author, journalist, lecturer and human guinea pig. He has written four New York Times bestsellers that combine memoir, science, humor and a dash of self-help. He is also an editor at large at Esquire magazine, a commentator on NPR and a columnist for Mental Floss magazine. He is currently helping to build a family tree of the entire world and holding the biggest family reunion ever in 2015. His first book is called The Know-It-All: One Man’s Humble Quest to Become the Smartest Person in the World

A.J. Jacobs is an author, journalist, lecturer and human guinea pig. He has written four&#160;New York Times&#160;bestsellers that combine memoir, science, humor and a dash of self-help.
SEE INSTRUCTOR'S CLASSES