Skip to main content
photo & video
All Photography Classes > Post-processing > Davinci Resolve: How To Use Every Page > Fusion Page: Nodes

Lesson 19 from: DaVinci Resolve: How to Use Every Page 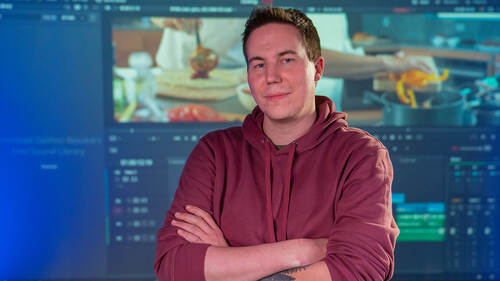 Post-processing > Davinci Resolve: How To Use Every Page > Fusion Page: Nodes

Lesson 19 from: DaVinci Resolve: How to Use Every Page

Resolve is Made of Pages

So if a major part of our workflow in Fusion is working with nodes, well, how the heck do nodes work? Well, basically a node is kind of like a flowchart, and every single thing that you do pretty much has to have a node. A node is like one instruction, like one step in the process. So, just looking at this example here, we have a couple of different nodes, and each node has a certain job. This first node is called media in. And what that does is that takes a clip from our timeline and brings it into Fusion. That's kind of like bring the clip in. Okay? Then, we go along this little line into a node called a merge. What a merge does is puts something over something else, so they're merging things together. And generally this is something where you would put text over something else. It would be a picture or a different piece of footage. If you want to put one layer on top of another. Again we don't really have layers inside of Fusion. You just use a merge node to put something over somet...

hing else. So what are we putting over this footage? Well, remember when I was talking about these different viewers. We can preview what each node is doing by hitting either one or two on the keyboard. Right now, the reason that we're seeing this composite here is because we have media out in our second viewer. Media out is basically what the finished version of the shot is going to be. So right now, this is what our audience is going to see because we have media out in the second viewer, but we can load any of these nodes in the first viewer by hitting one on the keyboard. And so, I can hit one for media in and we just have this footage without this kind of steam that we've added in post. I can also select a different node like fast noise and hit one on the keyboard. And now we have just the steam. This steam is coming from fast noise, and fast noise is just kind of a way to generate clouds. It's just a fancy word for a cloud generator thing. And so, this cloud is being put over our original footage, and then our footage is being rendered back to the timeline with this media out. So, it's really kind of a flowchart. Everything flows along these arrows, and they don't even have to flow from left to right. They can flow from up to down or right to left if you're a crazy person. Like whatever you wanna do. I'll just hit undo a few times to get rid of that. But that's pretty much how it works is you put things together in a flowchart using nodes, and you eventually make what you want your audience to see.

Casey Faris is a self-described &#34;video nerd&#34; who creates tutorials and vlogs about video editing, color correction, and all things related to post-production for the 250,000+ subscribers to his YouTube channel.&#160;
SEE INSTRUCTOR'S CLASSES

I'm glad to see the DaVinci Resolve courses have been added to Creative Live. Casey Faris does a great job with his teaching. In this course he clearly explains the layout of each page and shares example workflows for each. It's really good as an intro to Resolve.

Helpful class if you are interested in DaVinci Resolve. Casey Faris presents the information clearly and doesn't waste time. Looking forward to his Color Correction and Fusion classes.

Made navigating through Davinci an exciting thing to do! Great work!