40 Seconds To Fame Or Failure 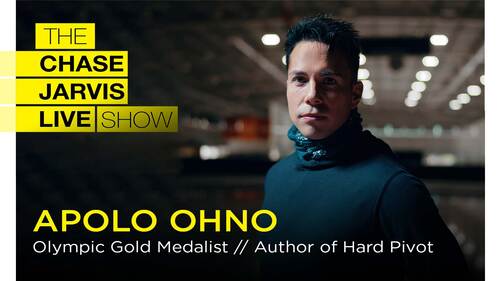 40 Seconds To Fame Or Failure

40 Seconds To Fame Or Failure with Apolo Ohno

In speed skating, a hard pivot is an aggressive turn that requires balance, focus, and courage. Blasting down the ice, shoulder to shoulder with another world-class competitor, blades on his feet, Apolo Ohno began his Olympic career in 2002, eventually winning eight gold medals and becoming the most decorated athlete in US Winter Olympics history.

Stories about the commitment, sacrifice, and work ethic required to reach the pinnacle of human performance are a dime a dozen. Just qualifying for the Olympics is an incredible achievement. But what happens when it’s over? Apolo writes in his new book, Hard Pivot, “I faced challenges like anyone else. The inner voice that once motivated me became toxic, amplifying my fears and insecurities. In life, we all face moments when we must make a hard pivot- times when we must adapt, reinvent, and find renewed purpose in the face of profound changes.”

As an Olympian, Apolo was and is still a role model worldwide. However, behind the cameras and limelight, he, just like everyone else, deals with the challenges of being human. He notes that before retiring in 2012, he was motivated to achieve the best in his field.

But what if that motivation stems from an intense fear of failure? While this is not necessarily a bad thing, it can take a toll on just about anyone, not just athletes. Whether you are in business, trying to start an organization, or studying to pass an exam, fear of failure can become toxic.

Apolo also confesses that even after winning gold, he passed up on celebrating with teammates because he may have lost focus on what is essential. Instead, he prioritized the things that could make him a better athlete and pushed every other thing to the backseat. His obsession with being the best blinded him to the fact that he was living through precious moments he could share with friends and family.

Apolo Anton Ohno claimed his first major speed skating title at the US Championships at the age of 14&#8212;after just six months of training. Over the next decade and a half, he went from kid prodigy to the most decorated US Winter Olympian in history&#8212;a title he still holds&#8212;earning eight Olympic medals in short-track speed skating across the 2002, 2006, and 2010 Winter Games.
SEE INSTRUCTOR'S CLASSES